From breast milk to supplementary food. When and what?

For the first half year, the best food for a baby is definitely breast milk. Supplementary food could be started from the seventh month of their life. That’s when the baby becomes significantly more active and breast milk no longer covers their daily energy needs. If it’s not possible to give breast milk to the baby, only start giving supplements with the recommendation of a general practitioner.

If you see that your child is already very interested in food and follows your forkfuls during meals, then it’s the right time to heat up the first puree for your child and let them start tasting. 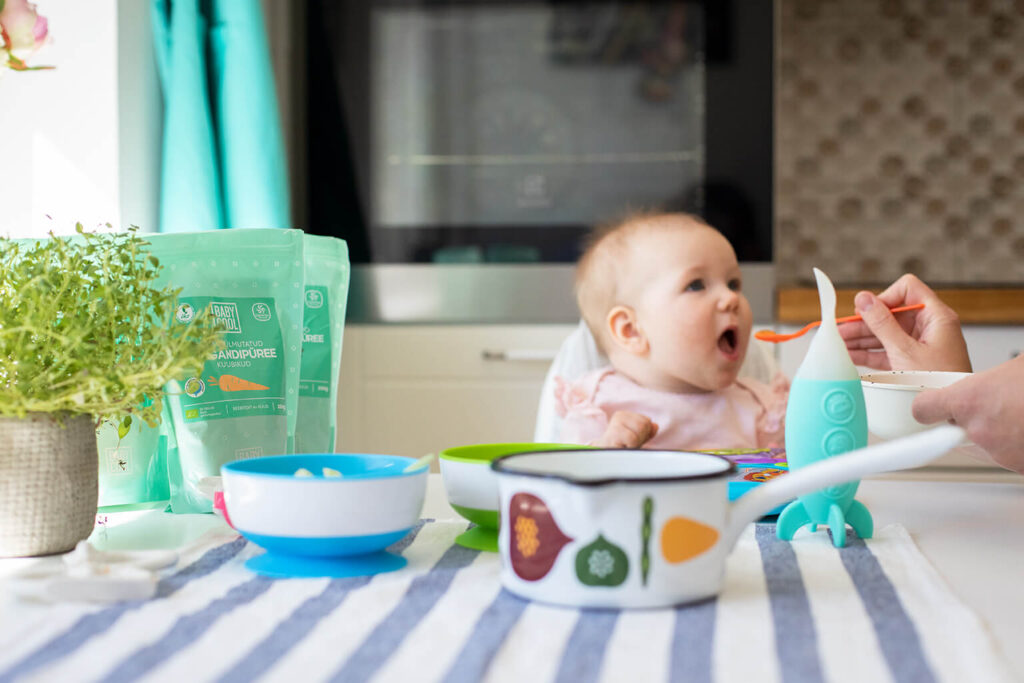 Recommendations for starting on supplementary food

When to start giving extra food?

Once your child is accustomed to vegetables, only then can fruit and berry purees be introduced – for excample when you start giving the baby  porrige (apple, pear, blueberry, redcurrant, raspberry, lingonberry, plum, cherry). 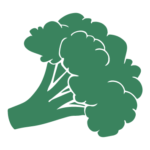 Don’t be afraid to give your child lactose and gluten – just keep an eye on your child to make sure there’s no negative reactions. Give grain products one at a time – for example, start with oats and consume them for 5-7 days before taking a new grain sort. Changing food too quickly on the menu does not give the right overview, which is suitable for a child, which is  not and does not create a habit of eating this sort of food. Always start with small amounts (a tablespoonful) and little by little increase the amount. Just like any other new flavor and / or ingredient.

Initially, make the puree more liquid, add either boiled water or breast milk to dilute it. It’s better to steam the vegetables or boil them with a little liquid. Make the porridge more liquid as well, in the beginning you can use wholemeal flour or flakes. You can also grind the flakes smaller or grind the porridge with a hand mixer. Add a little unrefined vegetable oil or butter to both the puree and porridge because the child also needs vegetable and animal fats and this increases the nutritional value of the food. From 9 months on, cow’s milk (a little amount) can also be added to porridge. Both butter, oil, and meat are added to the puree just before giving it to the child.

A toddler should definitely eat meat because it has the necessary substances (for example, protein, amino acids, iron) that aren’t found in vegetarian diets. It is important to make sure that the meat is high quality and fresh. Always give organic meat to your child – it doesn’t contain residues of antibiotics or plant protection products. The meat should be that of a young animal – this is especially important in the case of the liver, as all toxins are deposited there. The liver is the cleanest in a young, free-range animal. However, the liver contains a lot of iron, as well as vitamin B, vitamin D, and plenty of vitamin A. Due to the high vitamin A content, it’s not recommended to eat it every day, only about a spoonful a week. 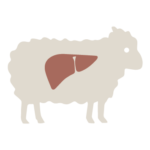 In the case of fish, use fish caught from local fish farms or clean inland waters when making puree. The Baltic Sea is too polluted, so fish caught from the sea are not suitable. Imported cooled fish may have been treated with preservatives.

You should give animal-based foods to your child at least one meal per day. A few days a week, you can replace the meat with fish, liver, or egg yolk and, for example, mix it with vegetable puree. Later, you can add finely ground rye or buckwheat to the vegetable-meat puree. Sausages and other processed meat products are not suitable for children. Red meat (veal) is not replaceable with chicken nor fish. All of them are important and the food should be kept as diverse as possible.

As the first year of life is an exceptionally fast period of growth and development for a child, it’s very important that the food is clean, varied and nutritional. Be sure to get organically grown and local ingredients if possible. Locally grown food absorbs better than food from thousands of kilometres away because it comes from an environment our bodies have become accustomed to for generations. In addition, Estonia’s nature is very clean compared to the rest of the world. If you can’t make all the purees yourself, then definitely prefer Estonian products.

Freezing is the best way to preserve food

Freezing is the best way to preserve food. By keeping vegetables and fruits in a cellar, they lose significantly more of their nutritional value than in a freezer. Frozen food stays good for up to two years and allows you to consume local garden produce all year round. If purees are frozen in cubes, you can choose a portion that is exactly the right size for the child to eat in one sitting. In addition, the various frozen purees can be mixed together or added to other meals so that your child can meet their daily meat or vegetable needs. For example, you can add pumpkin and lamb puree to rice or buckwheat – this way you can feed solid food to a child who already has some teeth.

You can also add, for example, a carrot cube to pasta or homemade sauce. A cube of pear, apple, apple-blueberry or pear-strawberry puree is a great addition to breakfast porridge – it cools the porridge and acts as a jam at the same time

Don’t forget that giving extra food starts laying the foundation for your child’s eating habits and table manners. Your child then gets used to eating, for example, vegetables, lamb, and liver, which they might not want to eat otherwise. Your child should be offered one food up to 20 times – if they still don’t eat it, then this particular food probably doesn’t taste good to them. A child older than a year can already eat all the basic foods at a dinner table with the family, or at least as much as they have an appetite for. How fine you should make the food depends first and foremost on the child’s individuality and number of teeth. Starting to give extra food doesn’t mean that you stop breastfeeding but just that you replace some meals with slightly more supportive foods. Be sure to leave a few hours between meals if you’re not giving your child juice or snacks. This way the child eats better and it also spares their teeth.

If your child is a little more than a year old, it is only natural that their food intake may become smaller and they’re no longer willing to eat every food – it’s not worth worrying about, it is normal. Every child is different, so you should try to see what works best for your child on an ongoing basis. And, of course, trust your intuition – mother knows best.

Mother of three and founder of BabyCool 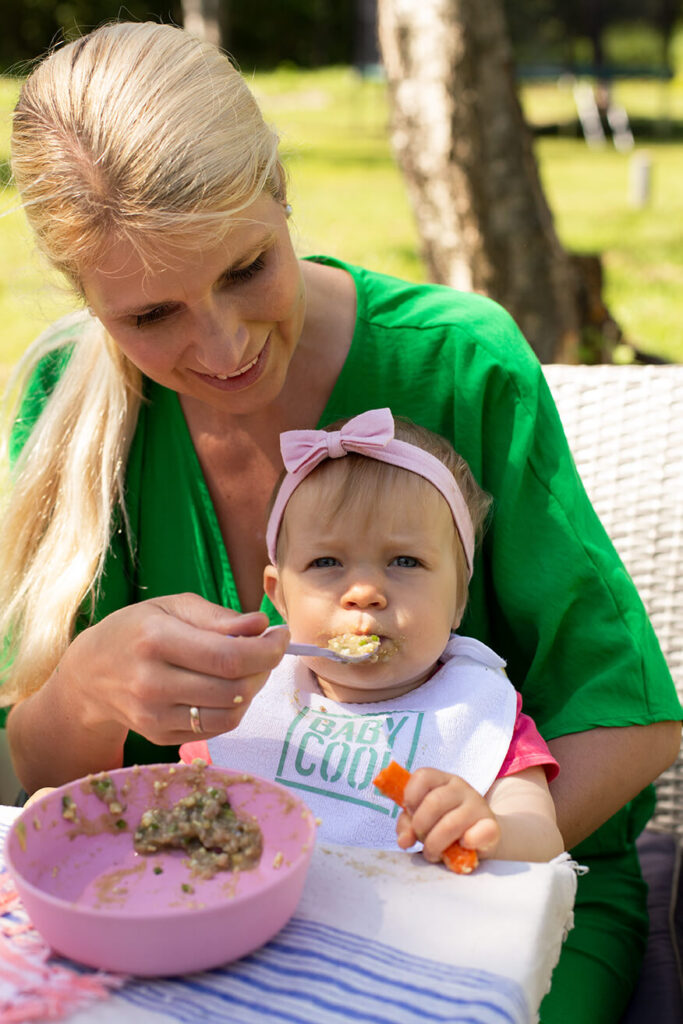 This website uses cookies to improve your experience while you navigate through the website. Out of these cookies, the cookies that are categorized as necessary are stored on your browser as they are essential for the working of basic functionalities of the website. We also use third-party cookies that help us analyze and understand how you use this website. These cookies will be stored in your browser only with your consent. You also have the option to opt-out of these cookies. But opting out of some of these cookies may have an effect on your browsing experience.
Necessary Always Enabled
Necessary cookies are absolutely essential for the website to function properly. This category only includes cookies that ensures basic functionalities and security features of the website. These cookies do not store any personal information.
Non-necessary
Any cookies that may not be particularly necessary for the website to function and is used specifically to collect user personal data via analytics, ads, other embedded contents are termed as non-necessary cookies. It is mandatory to procure user consent prior to running these cookies on your website.
SAVE & ACCEPT
0
Ostukorv